So it’s January, and it’s cold. No surprise there then! We haven’t had any snow yet here at Hooperhart Headquarters but I’ve got a feeling February might oblige… Myself and Mr Biscuits are snuggled up on the sofa under a variety of blankets this afternoon, watching the birds in the garden fluttering around the feeder, reflecting on the past few months and ruminating on plans for the weeks to come.

The festive season seems like a distant memory now – it’s amazing to me how events which happened three weeks ago can seem like months ago just because they happened ‘last year’. But it was a successful few months, a nice way to end the year. It’s great to finish the year with hardly any stock left, and a huge relief, as nothing is ever guaranteed.

2018 was definitely the year of the fox – I only began making works featuring foxes last summer and they have been far and away my bestsellers. I love foxes but I wasn’t aware so many other people did too! There are families of foxes living in the woods at the end of our road, and we quite often come across each other on the dog walk. I think it’s such a privilege to live in close proximity to wildlife and it lifts my spirits to know they are there, quietly going about their business.

The fox is such a symbolic animal and has been used countless times in art and storytelling to convey intelligence, elusiveness, trickery, transformation, wildness, freedom, magic powers, and so on. A forest setting adds to the sense of a story to be told… 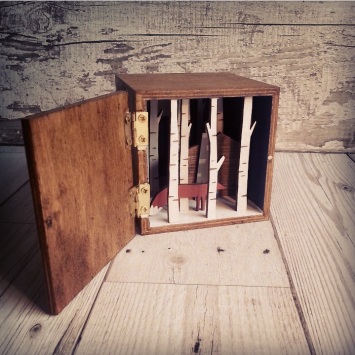 I recently read a lovely description by Unit Twelve from their upcoming exhibition Into the Woods: ” The forest acts as a potent symbol of adventure and discovery, a place where the barrier between reality and fantasy begins to thin…the wonder and whimsy of these magical places, a whimsy that is subtly shaded by with undertones of the sinister and the macabre”. I think this actually sums up what I aim to capture in my work in general – the creation of a little window into another world, an imaginary place just a little bit more magical and intriguing than our own…

Maker of stuff, animal lover and fan of biscuits, based in Scotland View all posts by Hooperhart

No new work, just lots of apple blossom🌸
~ Dead Tree Box ~
These wee pastel bird brooches will probably be the last thing I make for the Folksy for a while as the moving date draws ever closer 😬 Been procrastinating like mad but it really is time to draw a line under things and face the realities of life!
Last orders for Mother's Day delivery! 💗
A new version of the Cottage on the Cliff mini framed diorama 🌊
Cosy Cabin✨